Since I emailed Swiss city governments about their public toilet provision in August, I've had phone and email replies from most of them, so here's an update on what they told me. I'll be adding this to the main post about Swiss public toilets, too.

The very nice lady in charge of Geneva's public toilets informed me of something I hadn't noticed: that if you click on the icons on their map, you can see a photo and more information about each toilet. I went through all of them and made a list of the ones that were gender-neutral:
Unfortunately, all the information on Geneva's city website is under copyright, so I can't simply post all the details of these toilets here. The next step is to write back and ask whether they've considered opening up their toilet data.

Basel do have information on which public toilets are gender-neutral, but not in a form that they could send out to me. Their map does at least show the locations of wheelchair-accessible public toilets, which are generally gender-neutral. The man who phoned me up suggested I visit each toilet and check, which would be hard, with over 80 of them!

The people in Lausanne (map) kindly sent me a list of all their public toilets, of which the following are gender-neutral.

The Lucerne public-toilet masterplan is still being worked on, and the situation there is quite variable. Older toilet facilities are still gender-segregated, and will remain that way, but where newer ones are built, they are generally unisex. Not all facilities have a wheelchair-accessible toilet, but this is improving and all the facilities scheduled to be built will have one. The public toilets in Lucerne do not have changing tables.

Good news! All the public toilets in Winterthur (map) are gender neutral, with the exceptions of those at Härti Endstation (Wülflingen) and Wallrüti (Oberwinterthur).

In general, public toilets in St. Gallen (map) are unisex facilities with a wheelchair-accessible toilet, which normally requires a Eurokey to open. There are still a few older, gender-segregated toilets in operation, though. None of the public toilets have changing tables, due to a lack of room in the cabins.

Some public toilets in Lugano are unisex and some are gender-segregated, but I've not been told which are which. There is no city map for toilets in Lugano, but they are shown on the WC-Guide and the Pro Infirmis website.

The official flyer for public toilets in Thun is up-to-date. Toilets #2 and #12 are unisex, at the following locations:

The community of Köniz maintains only two public toilets, one at Oberwangen railway station and one at Neuhausplatz in Könizs. Both are gender-segregated and wheelchair-accessible.

The people at Neuchâtel have sent me a detailed list of all their public toilets -- unfortunately, it's in French and a little too detailed for me to quickly make sense of! I will post this information as soon as I can.

In Uster, as in other cities on this list, they're moving away from gender-segregated toilets and towards unisex facilities. I haven't been told the locations of any of them, though. Their new toilets generally have changing tables built in, unless there's a risk of vandalism.

I got a very concise response to my email to the Sion city council. There is no list or map of their public toilets; the toilets are all gender-segregated; they are accessible for wheelchair users; and they do not have changing tables.
Posted by Unknown at 08:09 No comments:

I had some time to work on the project this weekend, and here's what I got done: 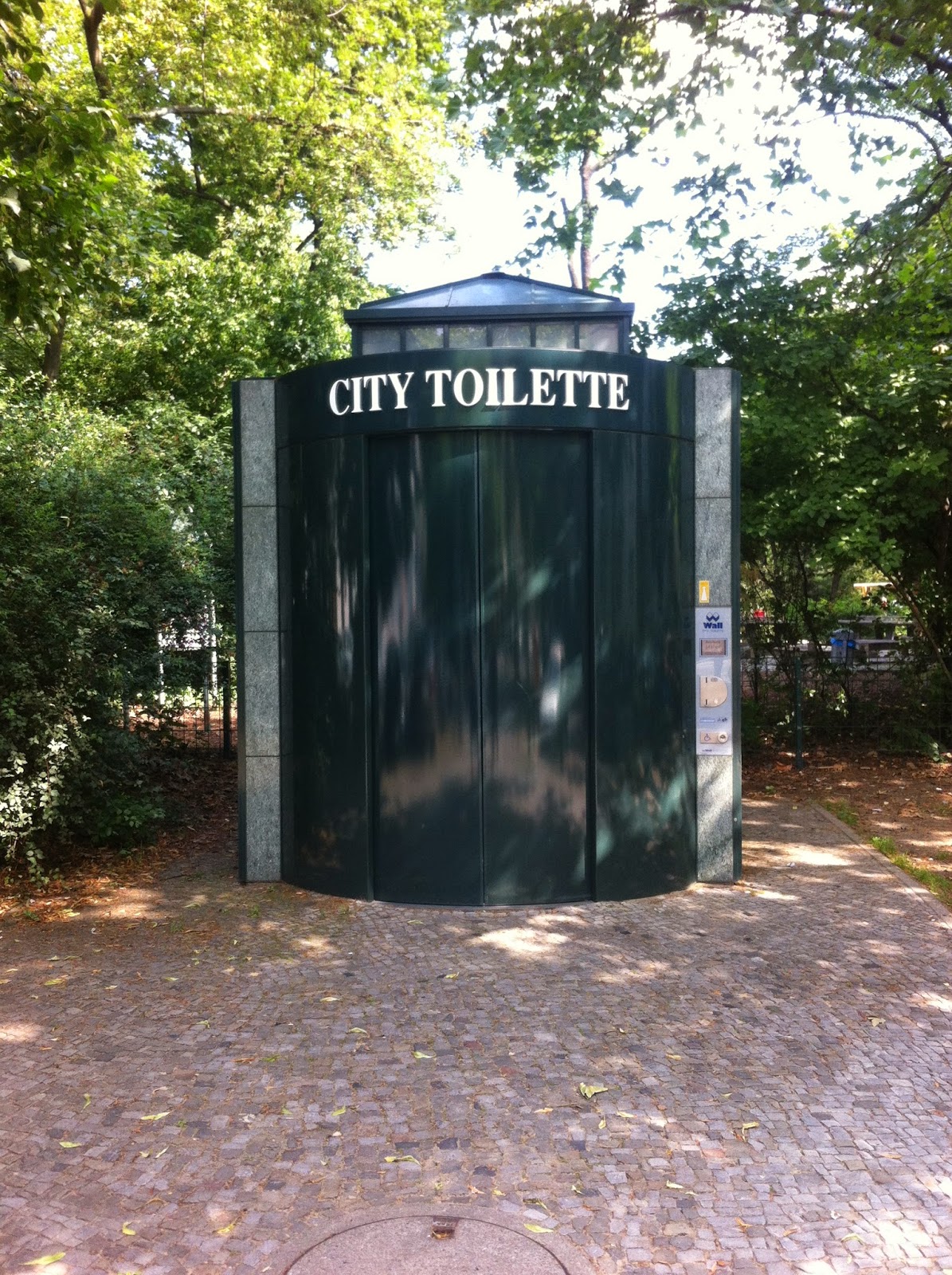 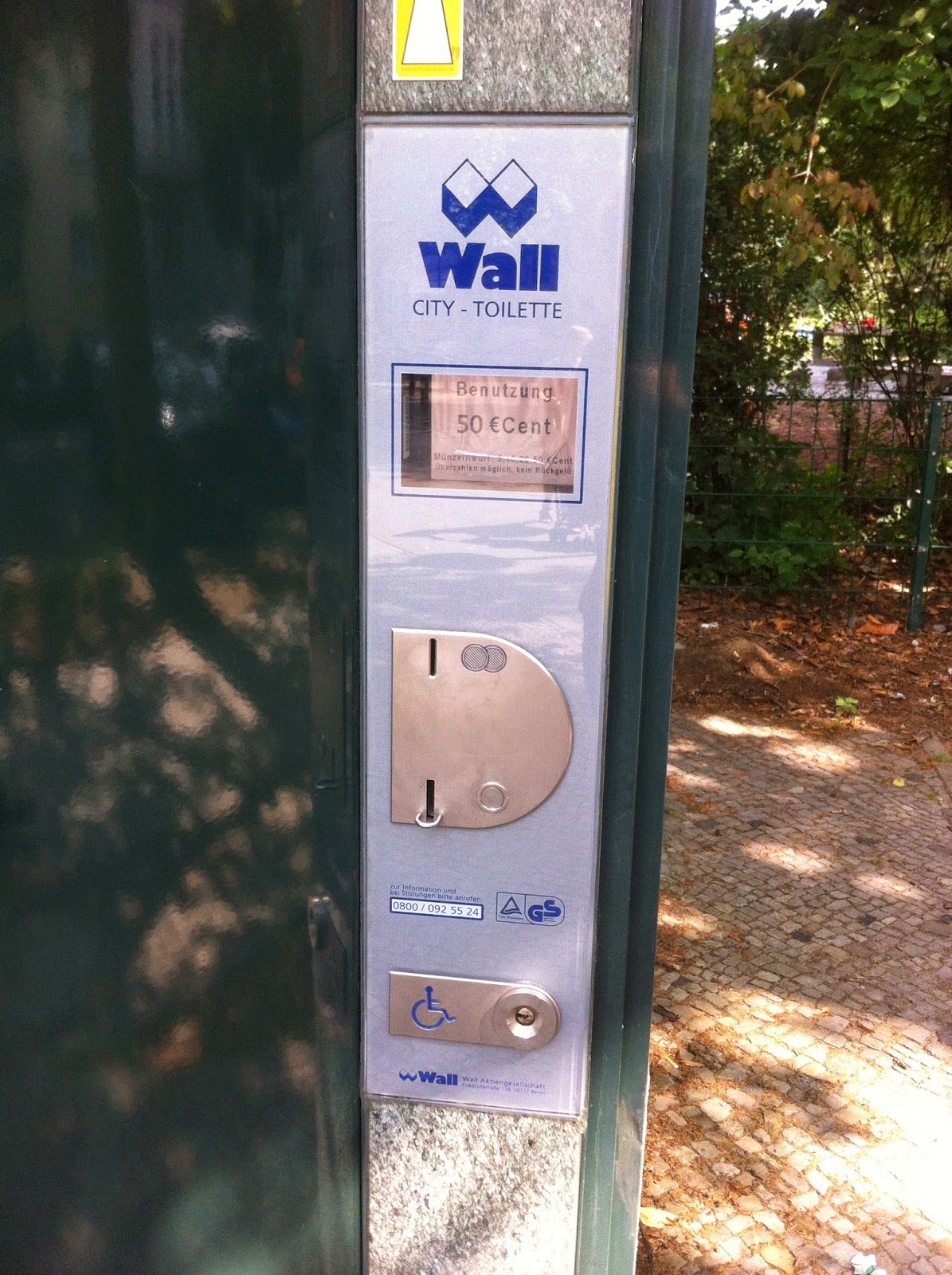 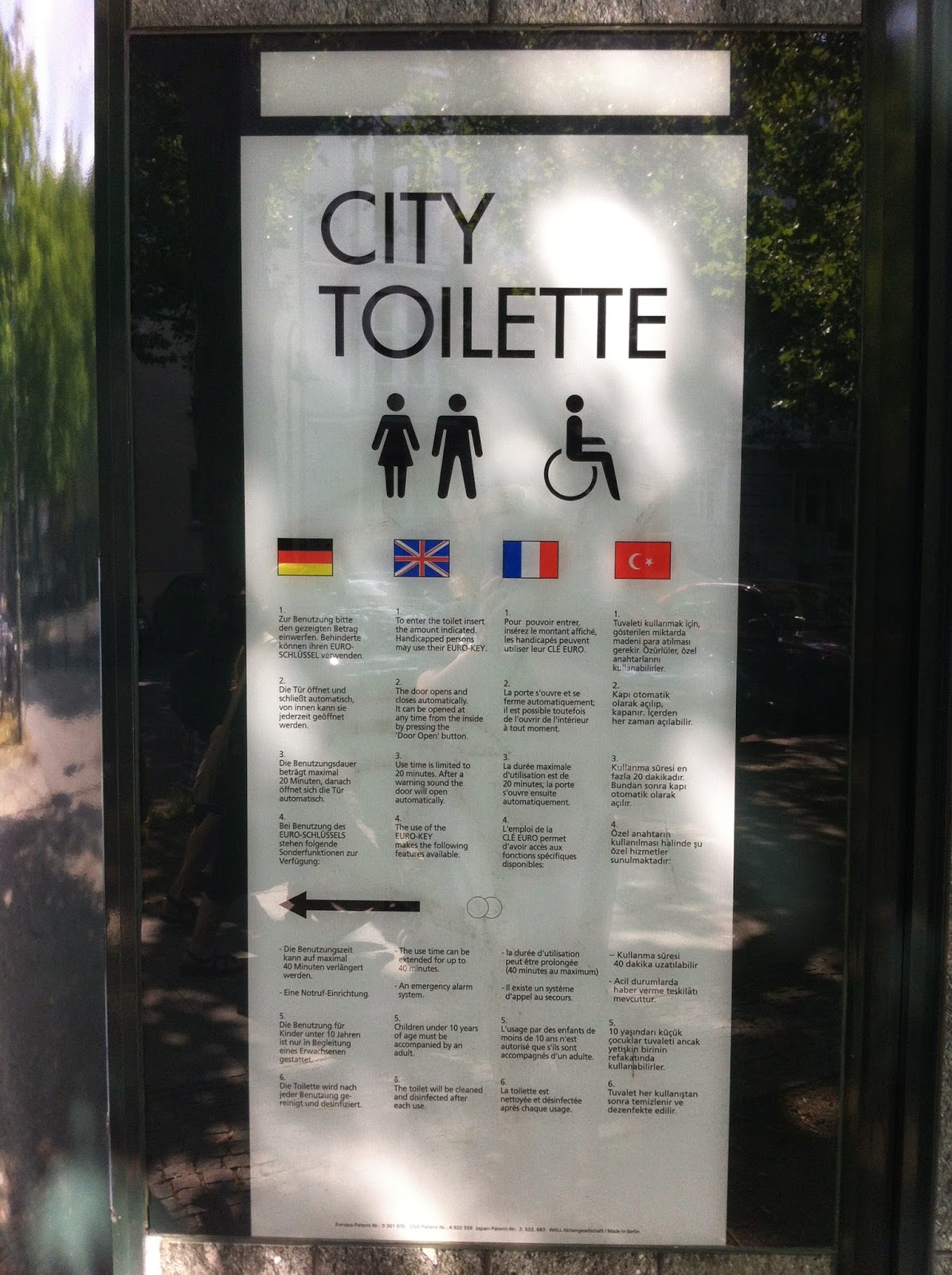 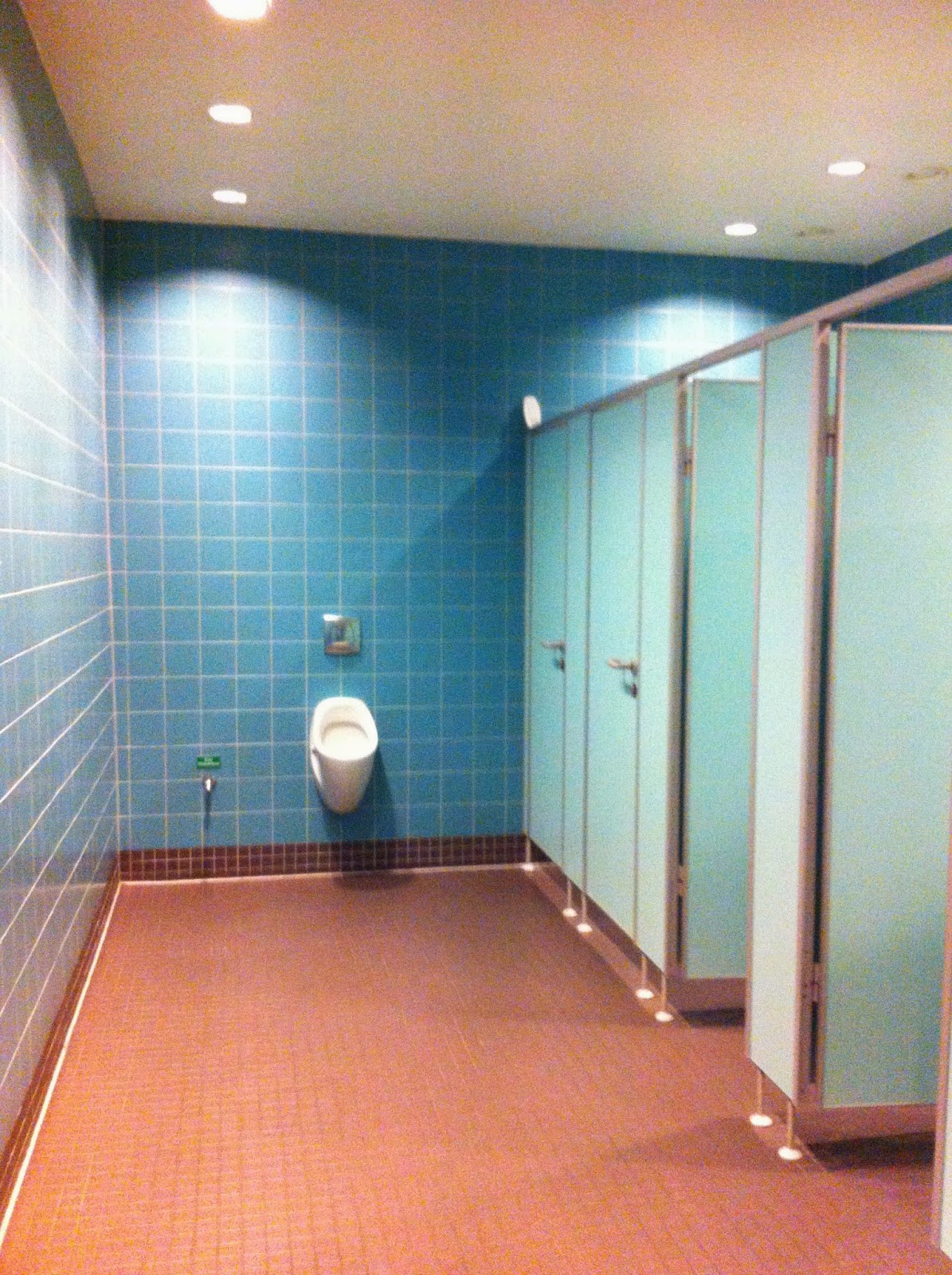 .@RachelKnowler The sign on the door called down! Thanks for telling us, we'll put it up again now! #genderneutral #OKFest14

Woo, gender-neutral restrooms! I like this design for the label, too. :) #okest14 pic.twitter.com/GK5kY8TfEJ

I'm in Berlin for Open Knowledge Festival, and keeping an eye out for gender-neutral toilets as I go. So far I haven't found any in restaurants, clubs, bars etc. (not that I'm really here for clubbing!) and REFUGE Restrooms only have three entries for the city. If you know where the gender-neutral toilets are here, please let me know or add them directly to the REFUGE Restrooms directory!


I am impressed with the Berlin public toilets, though. Here are some pictures I took of a City Toilette: it's wheelchair accessible, non-gendered, and has instructions for use in four languages. Note that unless you have a EuroKey, it costs 50 cents to use the toilet.

I also discovered that in the Kino in der Kulturbrauerei, the women's toilets have a urinal:

This is something I haven't seen before, and I'd welcome opinions on whether this is useful or not!

None of the toilets at the venue are gender-neutral, but OKFest put a sign up to convert one, and also marked it on the map. They responded quickly when I told them I couldn't find it!

.@RachelKnowler The sign on the door called down! Thanks for telling us, we'll put it up again now! #genderneutral #OKFest14
— OKFestival (@OKFestival) July 17, 2014

Woo, gender-neutral restrooms! I like this design for the label, too. :) #okest14 pic.twitter.com/GK5kY8TfEJ

Good news from Berlin: the borough of Friedrichshain-Kreuzberg decided to bring unisex toilets to all its public buildings a year ago, and now the borough of Mitte might follow suit.

The Friedrichshain-Kreuzberg measure was proposed by the Pirate Party and supported by the Left, Social Democrat and Green parties on the borough council. (The Christian Democrats were against it.) The Pirates have now also asked the borough council in Mitte to find out which public buildings there are suitable for unisex toilets. They want to keep the men's and women's options, but add a third room as an extra choice, with the aim of making life easier for trans* and intersex people. Public finances in Berlin are tight, but the Pirates point out that changing signs on toilet doors would be practically cost-neutral.

Many public buildings there don't yet have wheelchair-accessible toilets. The Pirate Party representative Lena Rohrbach acknowledged that this was also very important, and emphasised that the groups should not be played off against one another. I heartily agree.

About this project / Über dieses Projekt

The aims of this project are:
Your help is very welcome!
Die Ziele dieses Projects sind:Wir freuen uns an deine Hilfe!